Good vs. evil, light vs. dark, peace vs. war, love vs. hate, body vs. soul, mind vs. matter, us vs. them. The dichotomy between contrasting concepts can be referred to as duality or dualism, which suggests conflict between two opposing ideas.

Duality as a learning tool

Over the course of our human lives, we must often make moral choices that define us, and that teach us important lessons. Through freedom of choice, duality is a fundamental teaching tool. Duality provides us with choice between different courses of action, which enable us to grow and develop.

What choices enable us to be considered a good person? What constitutes a good life? What does a good society look like? If we gain our wealth dishonestly, lie, mistreat our children and abuse alcohol and drugs, we have made poor choices and we may be considered an immoral person. In contrast, a virtuous or moral person chooses to be honest, courageous, kind, generous, respectful and forgiving.

But there are more difficult moral choices: Do you choose to steal in order to care for a family you cannot afford to feed? Can killing someone be moral under certain circumstances? Do you kill Hitler to prevent the suffering and death of millions of innocent people? What about abortion, war, suicide and capital punishment?

Choosing morality in the University of Duality

The individual is an arbiter of what is moral and immoral in this University of Duality that we call life. However, an individual may work in a direction that they perceive as moral and good, which in hindsight may in fact be immoral. What may be considered as an evil act by one culture, may be regarded as good by another.

However, our moral compass is not entirely constrained by culture. Few people want to live in an immoral society, and similarly, civilization would not flourish without some concern for key moral issues such as fairness, justice, truthfulness and compassion.

Empathy, reciprocity, altruism, cooperation, and a sense of fairness are universal values that allow humans to minimize individual selfishness in order to live in groups, which in turn increase evolutionary fitness (for the individual but also for the collective group).

The overarching principle when making moral choices is the decision not to increase the suffering nor transgress the sovereignty of other individuals. Being moral often involves choosing the greater good and the lesser evil in this great big University of Duality.

But it gets more complicated…

The Greek philosopher Plato (~425 BC – ~347 BC) distinguished between a physical and metaphysical duality, which in turn has a defining influence on morality.

The allegory of the cave: the shadow world

To illustrate this, Plato describes Socrates’ allegory of the cave, where people are trapped inside a cave and facing a wall where shadows are projected by objects passing in front of a fire. The people begin to give names to the shadows, which are the closest thing to reality that the prisoners are able to see. 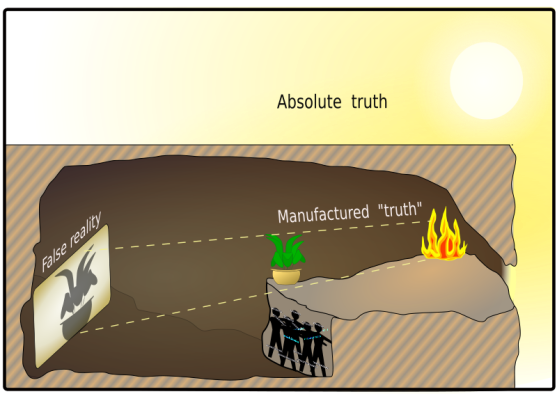 Many people are content living in the cave, believing these shadows to be reality. Similarly, we perceive the world through our senses, which only allow us to see projections of true reality. We often do not realize that what we see, hear, smell, taste and touch is only a shadow of true reality, which exists beyond our perception of the material physical plane of existence. Plato wants us to go outside the cave and truly see reality.

The soul and metaphysical reality

One example of this duality between physical and metaphysical reality is the concept of beauty. You may see the Mona Lisa and say that the painting is beautiful. How do we know what beauty is? Is it just a figment of our imagination or an accident of our opinion?

Plato says that we know beauty when we see it because we remember it. It must therefore exist in its ideal state somewhere  – and if we remember it, we were once there!

This is the theory of recollection. It could suggest the pre-existence of a human soul that came from the ideal world into our physical bodies on this imperfect material, physical plane of existence.

“…your favorite doctrine, Socrates, that our learning is simply recollection, if true, also necessarily implies a previous time in which we have learned that which we now recollect. But this would be impossible unless our soul had been somewhere before existing in this form of man; here then is another proof of the soul’s immortality”

By accessing and imitating this ideal and perfect world of the soul in our human physical incarnations, we can then materialize “the good” on the physical plane and therefore act morally.

“What causes quarrels and what causes fights among you? Is it not this, that your passions are at war within you?”  – James, 4:1, The Bible, New Testament

The overarching non-duality of all things

In Hindu and Buddhists schools of thought, the key to resolving these “passions that are at war within” is letting go of attachment and desire, as well as the illusion of separateness or duality. Through the practice of meditation, we begin to free ourselves from attachment, habits of thought and desires, “awaken” and see the unity of all things.

In Buddhism, Taoism, Hinduism and Islamic Sufism, the key to enlightenment is transcending dualistic thinking and merging into “the one”.

Non-duality is a difficult-to grasp yet profoundly important concept that will be the topic of my next blog.

Until then, let’s all make moral choices and try to resolve our inner conflicts, so that we may materialize “the good” on this physical plane in this great big university of duality we call life.