They say a watched pot never boils – waiting for something with eager attention seems to take a very long time. We’ve all been there.

For example, a friend of mine was distraught with anxiety about whether a man she recently met would ask her out for another date. The smallest of his actions led her to over-analyze every move he made, and she was constantly checking her phone and thinking about him. In the end, he never did ask her out and was not that interested to begin with. Why did she waste time and energy on this drama? 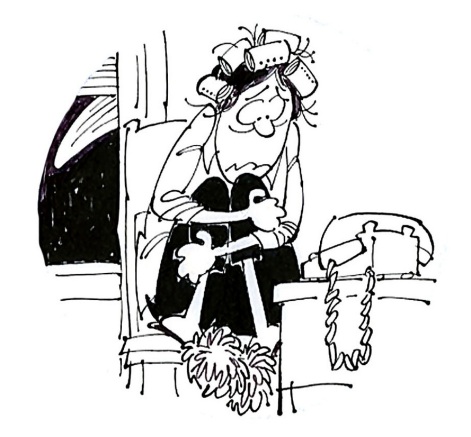 I see this behaviour often in my peer group of women in their 30s and 40s, who should know better by now. Men have a much better strategy in early romantic relationships: they are typically more relaxed and aloof, and do not want to lose their freedom nor settle too quickly in case something better comes along.

At the risk of sounding like Carrie Bradshaw: why do women cling in relationships, does it lead to failure and what is the best approach?

“I knew a little girl to whom someone gave a bunny rabbit. She was so delighted with the bunny rabbit and so afraid of losing it, that taking it home in the car, she squeezed it to death with love.” – Alan Watts

From an evolutionary perspective, women may be more likely than men to cling in romance. Certain traits increase the odds of producing offspring, and these traits are passed on to the next generation to help increase reproductive success. For example, men who “spread their seed” widely would leave more descendants than monogamous ones. Men are also typically more attracted to younger fertile women, who are more likely to produce offspring.

A monogamous woman may increase her chances of the health and survival of her offspring by being choosy about her mate for good genes, but also ensuring that he will commit to provide for, as well as protect the family. If a woman lost the support she was receiving from the father of her children, the chances diminished that her kids would survive to pass on their genes.

Clinging in relationships is caused by fear of being alone, fear of not having, fear of losing, fear of change and impermanence – and when fear takes hold, rationality goes out the window.

Fear is the mental attempt to control a negative outcome, and its purpose is to support survival. Evolutionarily speaking, people who feared the right things survived to pass on their genes, and the fear was also passed on genetically to the next generation. For example, a recent study looked at inherited fear response by exposing mice to the scent of cherry blossoms coupled with electric shocks. The next generations of mice feared  the scent of cherry blossom, even if they were never given electric shocks.

However, some fears are completely useless to us now, yet they still have been ingrained in us through heredity. Modern civilized humans are unfortunately stuck with certain traits and behaviours from our hunter-gatherer days.  But in the modern world, we are no longer hunting and gathering, being chased by wild animals and defending ourselves from physical threats. Yet, we relentlessly wonder, “what if this terrible thing happens?”.

“Nothing is terrible except fear itself” – Francis Bacon

Buddhism, Hinduism, Jainism and Taoism have a lot of advice on clinging and attachment. In general, they say that when we feel fear, anxiety or anger, we are experiencing a manifestation of our attachments.

“You only lose what you cling to” – Buddha

The Buddhists believe that fear keeps us trapped in our attachments. The greater the fear, the greater the attachment and the harder it is to let go. An attachment is when we look at our lives and we are not happy; we’re suffering because we want things to be different. When we say, “There’s not enough here; I have to have more to be happy”, this is attachment.

Not all attachments are bad. Healthy attachment between parents and children (see Attachment theory), family, friends, and even pets are essential. In Buddhism, the pleasures in life can still be enjoyed as they come, instead of craving and seeking them out. In contrast, addictions are vicious cycles that are best avoided, where life is spent maximizing the pleasure and minimizing the pain.

In Buddhism, the three poisons that cause all suffering are:

The opposites of the three poisons are wisdom, non-attachment and loving-kindness

A Buddha is someone who is fully awakened from the “sleep of ignorance” because he/she has completely purified their mind of the three poisons and understands the true nature of reality. A Buddhist must become aware of his/her fears and attachments they cause, to avoid repeating the same patterns over and over in their lives. Suffering shows where there are attachments, so that one becomes aware of them, in order to get rid of them.

Attachments affect our perception: we notice and think about that which we are most attached to; meanwhile there are millions of stimuli that we miss every moment. Attachments affects our decisions, and we end up creating our own universe with our attachments, aversions and fears. We can conform to the fictions of our mind and egos, or be in harmony with the way things are with acceptance and openness.

Buddhism maintains that in life, there will always be joy and sorrow, and things will come and go; but it’s the fear and attachment that brings pain and suffering to our lives. We can’t control whether things will go our way or not, but we can control our minds, our responses and our conduct. By looking at our fears with compassion and openness and uprooting our delusions, we can start liberating our lives from the endless cycle of suffering. Then we can take life as it comes to us.

“If you’re suffering, it’s because you’re forgetting who you are” – Buddha

How do you decondition attachment?

The spiritual teacher Ram Dass says, “Be Here Now”. The more we are in the present moment and in touch with our senses, the more decondition grasping, clinging and attachments. We can practice this, for example, by eating ice cream and slowly savouring each spoonful rather that quickly guzzling it down to be left with the feeling of wanting more. It takes practice to stay within each bite of life and to not go down the path of “having to have”.

Hindus, Buddhists, Taoists and many other faiths practice meditation, which is the main tool par excellence to decondition attachment and live in the present moment. The theory is that attachment and suffering is created and fueled by our thoughts, and quieting the mind through meditation can help release us from negative thought patterns. Through the practice of meditation, the mind becomes better at focused mental concentration, called one-pointedness of mind, and mindfulness, which is just noticing or witnessing emotions and anything that comes up without judgement. Both concentration and mindfulness are used in meditation in order to gain insight into the true nature of reality. Meditation is there to help us live our lives well by being present here and now.

If we can’t orchestrate the workings of the universe, we might as well surrender – and it takes faith to surrender. Faith is not about clinging to an idea or belief, but to let go.

“Faith is a state of openness and trust”– Alan Watts

“To have faith is to trust yourself to the water. When you swim you don’t grab hold of the water, because if you do you will sink and drown. Instead you relax, and float” – Alan Watts