This morning, my 6-year old daughter found a few stray white hairs on my head and said, “Wow mom, you’re going to be an old lady soon!”. I’ll be turning 37 in a few weeks, yet 40 – the beginning of a new era – is just around the corner. I’m sure I’ll still look and feel like a healthy and vibrant woman in my 40s and hopefully my 50s and 60s, but I will begin to feel my place in society change as an “older woman”.

It’s no secret that women face a double standard when it comes to aging, especially in western industrialized societies and in popular culture. Women who don’t marry by a certain age are labeled as “old maids”, “spinsters” or “old hags”.  Meanwhile men are perpetually perceived as bachelors.

As women age, they are viewed as “old” much sooner than men, suffer from ageist stereotypes earlier than men, and are generally judged on their appearance more harshly than men. Men with lines on their face are seen as wise and experienced, while women are just seen as looking old. Men with grey hair are thought to look distinguished (aka “silver foxes”), while a woman whose hair is beginning to grey has “let herself go” and should be horrified.

This was hilariously illustrated in comedian Amy Schumer’s recent and now famous sketch, “Last f*ckable day” (video unavailable in Canada but see this instead), in which Tina Fey, Julia Louis Dreyfus, Patricia Arquette and Amy Schumer celebrate their last day as a believably f*ckable woman in Hollywood.

Needless to say, this is not the case for older men in Hollywood. There are a few roles for actresses in midlife and older, whereas male actors continue to work much longer, sometimes playing romantic leads well into their 70s with women half their age as their love interest. 37-year old actress Maggie Gyllenhaal recently recounted that she was told by a Hollywood producer that she was too old to play the love interest of a 55 year old man.

There are also few interesting roles for older women, other than witches, evil stepmothers, Queens, or mothers who exist in the background with no real goals of their own. In an analysis of 100 top grossing American films of 2002 found that major male characters far outnumbered major female characters (73% vs 27%).

Hollywood perpetuates many harmful stereotypes about older women and their loss of power in society as they age. However, in real life, there is an increasing number of powerful older women – heads of state, corporate leaders and media influencers – that are making society richer through their work. If one takes a look at the Forbes 100 most powerful women, most are over 45 years old, white and privileged. Not only are women underrepresented in many realms of society, but so is cultural diversity.

Although there are many more examples of powerful and accomplished women, they are currently the minority, especially in the corporate world and the political arena.

To add insult to injury, women are often devalued as being a “token” of diversity rather than having earned the post – and this is just the tip of the iceberg in terms of biased treatment. Powerful, older women often receive harsh criticism based on their gender and appearance as they age. They are judged, ridiculed and reproached – by both men and women – which undermines their work and accomplishments.

“Will this country want to actually watch a woman get older before their eyes on a daily basis? But men aging makes them look more authoritative, accomplished, distinguished. Sadly, it’s not that way for women, and they will tell you.” – Rush Limbaugh, referring to Hillary Clinton.

Why are there so few women at the top?

Even though women are increasingly highly educated and ambitious, there are two main reasons for the lack of women in high-level leadership positions:

Then there is the “mommy penalty”: even though women are making gains in education and workplace equality, mothers often earn less than fathers. It has been shown that women with children under 18 typically earn less than women without minor children, while men with kids earn more than men who don’t have kids. 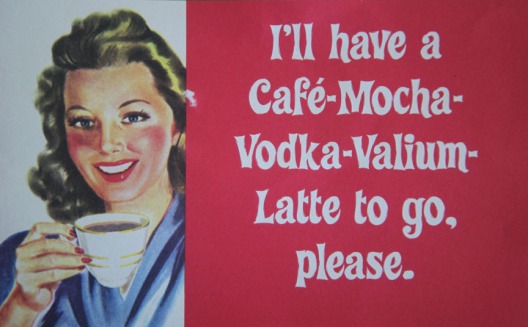 Furthermore, women still do more child-care and housework than men, and are often forced to leave the workforce due to the stress of conflicting demands on their time, as well as inflexible work conditions. As men are gradually taking on more of the child-care and housework, they also will need more flexibility in their careers. However, the relentless demands of being a parent, often forces one parent to make concessions in their career  and be the “lead parent” (see essay Why I Put My Wife’s Career First, by Andrew Moravcsik, Annie-Marie Slaughter’s husband).

When the children grow older and are more independent, women can focus more on their careers, which is why there are many “older women” who climb to positions of power later in life.

A career renaissance later in life

I’m a single mom who does 100% of the childcare and housework (ok, I pay a cleaning lady to come once every 2 weeks and she is my saviour), and I have a full-time job as a middle manager at a renewable energy company. I have no partner and my family does not live close by. Although I know I could excel in a higher-level position, I do not want to work overtime and weekends because I have many other responsibilities outside of work (For the record, I’m extremely efficient between 9 am-5 pm and have never missed a deadline or asked for an extension in my entire career).

A higher-level position would likely conflict with my other life goals, such as being present for my daughter, maintaining friendships and investing time in my interests and hobbies. But it doesn’t mean I can’t have a career renaissance in my 50s when I finally have a bit more spare time!

So ladies, what do you want to be when you grow older? We can only hope that harmful stereotypes perpetuated by popular media will be obsolete, and that talented women, young and old, will be increasingly appreciated and respected by society in the future.