“I love them all, they’re all sweet. They’re all just sweet guys”, says Canadian singer-songwriter Donovan Woods of the songs on his new album Hard Settle, Ain’t Troubled.

The album has already received wide acclaim: The Globe and Mail describes it as “a gentle, honest collection of melancholic observations and hushed tunefulness.” From front to back, Hard Settle, Ain’t Troubled is chock-full of original, beautifully-crafted songs, each distinct, catchy and captivating.

Woods’ folk-country sound is reminiscent of Steve Earle and Ryan Adams, and his pop-friendly melodies sometimes evoke Bryan Adams and Jack Johnson. Overall the album is songwriting at its finest, with warm melodies, clever and honest lyrics coupled with a soft, gentle and genuine voice. 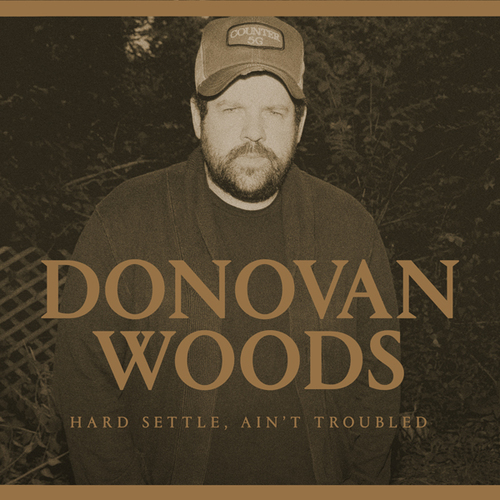 When I interviewed Donovan Woods, his single What Kind of Love is That? hit #1 on CBC Radio 2’s Top 20 later that day. On the Nights You Stay Home, an upbeat rhythmic number about ruinous jealousy, has also been in regular rotation, recently spending four weeks in the top three singles.

In the song What Kind of Love is That?, Woods explores the light and dark sides of love with his bluegrass-style guitar picking accompanied by subtle, ominous string arrangements: “What kind of love is stronger in the broken places. Fills up the lonely spaces, picks you up when you fall down. Drives you home when you’re drunk downtown. When you fall off the edge of the world cause it’s gone flat. What kind of love is that?”. The effect is understated but powerful.

Woods’ previous albums were self-released and recorded over “months and months and months,” as he gradually found the money to produce them. For this new album, “It’s the first time I had ever had a real budget and I could do everything pretty quickly, hire the musicians that I want and not have any compromises in terms of taking my time,” says Woods.

Hard Settle, Ain’t Troubled was produced by James Bunton, who was “a really calming presence and that’s what I needed,” says Woods. “It’s stressful to make a record, especially when the one prior got some attention. It was the first record that I knew people would listen to. I really wanted it to be good and I felt stressed out about it.”

His previous studio album Don’t Get Too Grand was nominated for a JUNO award. Woods also received international attention when his ballad Portland Maine was recorded by country music star Tim McGraw.

Woods is born and raised in Sarnia, Ontario, but has lived in Toronto for over a decade. His poignant and heartbreaking song, They Don’t Make Anything in That Town, is a piano-led ballad about his disintegrating hometown:”I was going to drive a truck. I was going to answer phones. I started making up songs and made it out. They don’t make anything in that town.”

His lyrics have been described as stark, economical and honest, and they are written in plain no-nonsense language. Woods majored in English and Drama at the University of Guelph before moving to Toronto, and it shows in his song lyrics. “Poetry for me is a big deal, I read a lot of it.” Although it can seem understated, there is a certain level of drama in Wood’s music, and that’s what makes him so captivating.

Woods has worked patiently and diligently on his craft throughout his musical career, but “I had other jobs until really recently,” working an office job at the Royal Conservatory of Music in Toronto until he had to go on tour and promote this album.

The title and theme of the record, Hard Settle, Ain’t Troubled, reflects the struggles that normal people face in their everyday lives. Woods explains, “Hard Settle is like a hard time. It’s hard to get your mind settled into something but I ain’t troubled – everything’s fine. I think it’s hard to feel satisfied but that’s OK. You just think, well I’ll just never be satisfied – and be satisfied with that.”