It was only a matter of time. After 12 years of working on their individual solo careers, Canadian singer-writer siblings Matthew and Jill Barber have just released their first joint project, The Family Album.

“We always thought eventually some day we would collaborate because we’re good friends as well as siblings, and because we really respect each other as musicians,” says Jill Barber. “I started my own family, I have two young kids. I think I was in a family state of mind and our album cycles aligned.”

In their respective careers, Jill and Matthew Barber have accumulated a total of fourteen albums and thirty-odd award nominations. Matthew and Jill are both comfortable playing a wide range of musical genres: Jill has explored folk-pop sounds to more a more recent affinity for vintage vocal jazz in her music. Matthew is known for is soul-searching ballads, his country-folk songs and indie-pop tracks with clever hooks. His latest release Big Romance was nominated for a JUNO award last year. 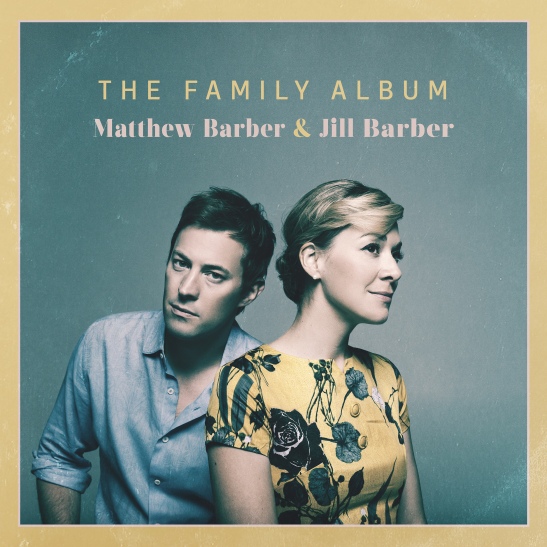 The Family Album consists of six covers and five original songs, written specifically for this album. Matthew composed the songs The Sweeter the Dawn and Grandpa Joe and Jill wrote Today, Big Picture Window and One True Love. “Matt and I would each go off and write and then workshop the songs with one another. For the most part, it came together pretty naturally,” says Jill.

“As teenagers, we were each others first audience. When I’d finish a song, I’d call him and sit in my bedroom and play it for him for the first time, and he would do that for me too,” Jill recounts. “The reason I’m in this business is because my big brother encouraged me to pick up the guitar when I was fourteen. And he and I both started as teenagers and never stopped.”

All that practice has also paid off: the songwriting and the arrangements on the album are superb. The Family Album is the kind of music you’d want for a balmy summer sunset: warm and dreamy ballads, delicate harmonies, soft strings and a touch of Americana, country and folk. The album also contains a good selection of more upbeat songs, like the anthemic track One True Love, which shows off Jill’s distinct sultry and expressive voice. The song is as catchy as it is danceable.

Not surprisingly, the theme of family, in its most positive connotations, is omnipresent on this album. “I wrote for the first time about my own children and about settling down,” says Jill who is married to CBC Radio personality Grant Lawrence, with whom she has a two-and-a-half-year-old son and a three-month-old daughter. Matthew’s song, Grandpa Joe is a tribute to their Scottish roots and the grandpa they never new.

The opening track, I Must Be In A Good Place Now features soft mandolin, guitar and fiddle, and is the perfect song for lying in a field under a blue summer sky and watching the clouds pass by. Bobby Charles, a songwriter from the early days of rock ‘n’ roll, originally wrote the song.

“We’ve been singing Neil young songs our whole lives. On family car trips, he was the only artist that we could all agree upon,” she recalls.

Jill explains that a large part of the creative process for this album involved her and Matthew listening to countless records, talking about music, discussing what makes a great song and interpreting some of their favourite cover songs.

The album was recorded over seven consecutive days in Toronto, with a group of talented musicians. “Our goal was just to bring together a group of incredible musicians in a room together, to play the songs, to shape them live off the floor, to hit record and try to capture a bit of the magic of fresh songs with new players,” explains Jill. “We really just wanted to bet a beautiful capture – a beautiful recording of music being played live.”

The Family Album has been a labour of love for Matthew and Jill. “This project has been such a return to our roots in an amazing and wonderful way. Now here we are, fully grown adults, still calling each other and playing our new songs.”

Indeed life has come full circle for Matthew and Jill. “Now we’re really in it together working on the same project.”

Jill and Matthew Barber are on tour together promoting The Family Album. See show information for Canadian and American dates. More dates to be added shortly (including a stop on Montreal in the fall).